Wittgenstein and the Arts - Immortalizing the Ordinary 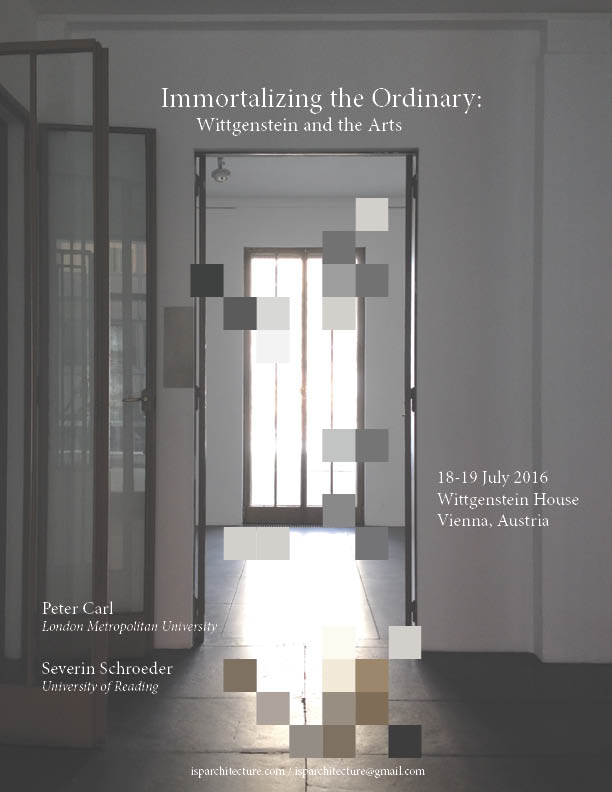 A symposium at the Wittgenstein-Haus in Vienna in July this year, organized by the International Society for the Philosophy of Architecture.

Wittgenstein famously argues against metaphysical claims, or those explanations he describes as having gone beyond both the limits of language and of our ability to comprehend. The boundaries of architecture’s language, typically set by our historians, theorists, and practitioners, would by extension also teeter into the non-sensical on crossing the threshold of comprehension. Given the possibility of non-sense in architecture discourse, this call for papers asks that architecture’s language be scrutinized according to the loose analytic method of later Wittgenstein. For many lay person, perhaps even lay architect, would claim there is discourse that is either setting new limits to our language surrounding building or falling into non-sense. Perhaps there is value in delineating what the boundaries of sense in architecture are?

The position against metaphysics, often referred to in the standard reading as the anti-metaphysical critique, suggests that Wittgenstein would reject all of architecture theory. Yet, a sweeping rejection seems too drastic, even for Wittgenstein. Given that theoretical work has successfully resonated with us, its audience, evidenced by the fact that we in turn shape building informed by theoretical work, not all theoretical reflection can be meaningless. On closer reading, it is clear that Wittgenstein suggests that some forms of reflection do fall outside of his metaphysical critique, suggesting further still that only some forms of theory are contested by his non-sense claim.

Compounding the matter within the case of architecture, Wittgenstein defines architecture in such a manner as to suggest that it is defined beyond its physical reality, or metaphysically. He states, “architecture immortalizes and glorifies.” Precisely what is immortalized and glorified is necessarily an idea about a thing, or a notion attributed to the building, as opposed to a physical characteristic embodied within it.

The two-day symposium set at the Wittgenstein House in Vienna looks to bring to architects and designers’ attention the potential significance of Wittgenstein’s method of investigation to their work, in terms of both understanding architecture and excelling at its practice. The possibilities for explanation are broad and interdisciplinary, and as such, participants are asked only to narrow their focus to the building, the city, or tectonic exercises. Participants are also asked not to limit their discussion to either aesthetics or to ethics, as for Wittgenstein, “aesthetics and ethics are one.”