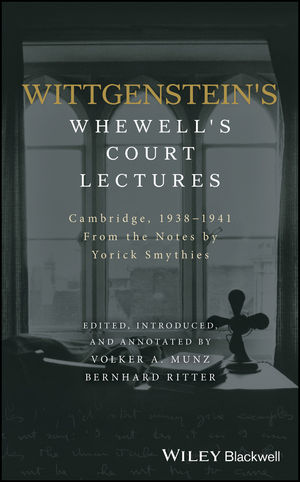 Wittgenstein's Whewell's Court Lectures, Cambridge 1938–1941, from the Notes by Yorick Smythies, will be published on 2nd May 2017.

These are new lecture notes of lectures Wittgenstein delivered in Cambridge. Only three lectures and parts of a fourth of about 70 in total have already been published. Some of the material included in the volume, especially that from 1940 (Lectures on Description, Lectures on Belief...), ranks among the best Wittgenstein lectures that have come to us. They are also among the most reliable, since 98% of the text of these lectures is reproduced from Smythies' immediate lecture notes, not from rewritten notes or memorized summaries. The volume provides a better understanding of the development of some of Wittgenstein's ideas, since he sometimes lectured on topics before having written much about them. There are early lectures on certainty ("Puzzle of Trinity College", Knowledge Lecture 8, Belief Lecture 7) and on concept-formation (Belief Lectures, second half). Wittgenstein also discusses the views of authors on which there is little in his published writings or in the Nachlass, most notably David Hume, Kurt Gödel, and W. E. Johnson. There are also some new philological findings, such as the discovery that the so-called "Lectures on Religious Belief" are a compilation by the former editor. Two of the three lectures were not given at the same time and one remains undatable, which means that it is not where it allegedly should be. Only one of these lectures is reprinted in this new volume.